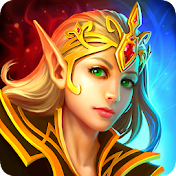 If you’re fond of pixel games, hardcore and old school fantasy MMO RPG without auto battle and autorun — join us!

Warspear Online is a classic 2D MMORPG in English with pleasant and nostalgic atmosphere, huge fantasy world and rich plot, history that counts more than 12 years already and with fans from all over the world, the game which works even on the simplest devices. Here you can always find something to enjoy and play alone or with friends!

Best MMO RPG Game of 2015 according to BEST APP EVER AWARDS. You can download the game and all updates for free!

💥 Arinar is steeped in the fire and fury of the millennial War of the Spear. Heroes rise from the ashes every day, explore the huge world, face dangerous bosses and fight for two powerful Alliances — the Sentinels and the Legion. It's time to choose a side, stand side by side with your friends and take on your enemies with all the power of skill, metal and magic to change the balance of power and turn the tide of history!

🌟 Create a unique warrior
4 races, 18 classes, customization of appearance, decorative skins, costumes are available to you.

💪 Rock
100 expert skills and 100 relics to add effects to basic skills — endless possibilities to create builds to suit your playstyle.

💀 Sharpen your combat skills in PvE
Crush powerful monsters and bosses in the Dungeon PvE regime and in the open world. Get stunning awards, weapons and equipment.

⚔️ Fight in PvP
Defeat your enemies: open PvP, the Arena with 2x2, 3x3, 5x5 modes and the Temple of Seals, as well as regular massive battles between Alliances are available to you.

🛡 Play with your friends
Unite with your companions in guilds and groups. Participate in GvG battles for Guild Castles and in the weekly Guild Tournament.

⚒ Master the craft
Learn 9 craft professions. Create valuable items for yourself and for sale.

📜 Be a part of an amazing story
Complete 1500 storyline and daily quests and unlock a new chapter in the glorious history of Arinar in the "Ship Graveyard" territory!

Go to the depths of the sea in search of a powerful artifact. Huge underwater territories, islands and grottoes, the identity and code of pirates, the intelligent ancient race and bloodthirsty monsters, the secrets and treasures of the deep sea, the most dangerous dungeons and exciting guild events — this is just a part of what awaits the most brave heroes.

While the warriors of Arinar fought fiercely against the strongest enemies, in the silence of abandoned temples and mountains mysterious heroes honed their combat skills... We present to you two completely new classes — the Templar and the Chieftain!

🔎 Learn more about the game and join our community 🔍